Indigenous leaders this week held an unauthorised healing ceremony inside the British museum, to acknowledge centuries of injustice and oppression. The group, along with the COP26 Coalition, climate justice activists from around the world, will then gather at COP26 in Glasgow to demand that politicians and negotiators acknowledge the importance of justice and equity in the talks, and acknowledge historical, systemic, and institutional ongoing injustice.

The ceremony began under the moai statue of Hoa Hakananai’a. The moai was taken in 1868 by the crew of a British ship. In 2018, the Museum received a request for the return of the statue from the people on Rapu Nui. The British Museum acknowledges in the exhibition: "For many Rapanui, the return of the statue is part of a larger struggle to strengthen their identity after centuries of disease, population loss and colonisation." Despite this, the statue remains in the museum. 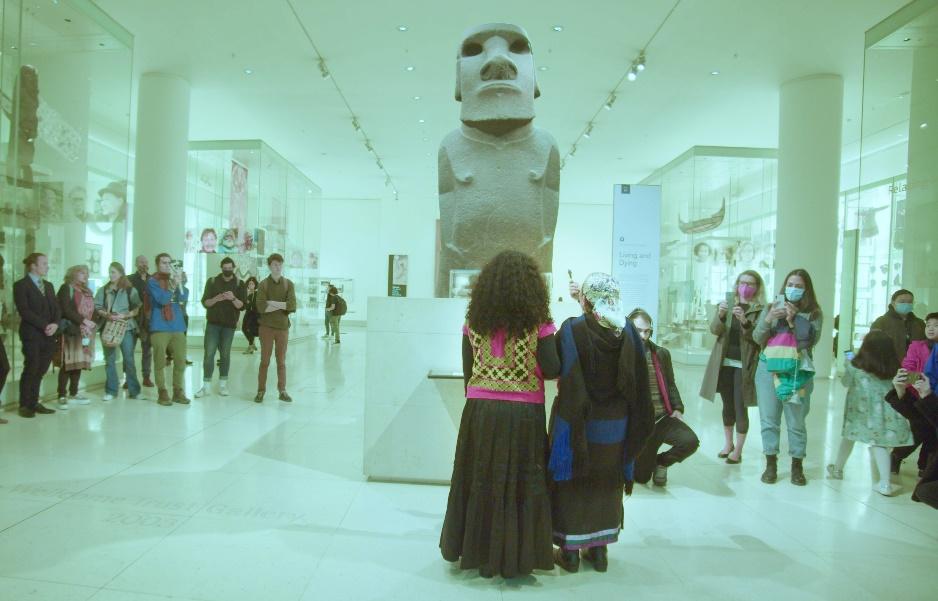 This action took place in the week before COP26, the UN Conference on Climate Change which this year is being held in Glasgow. Members of Minga Indígena COP26 will now make their way to Scotland, where they will put pressure on politicians and negotiators to acknowledge the importance of climate and ecological justice.

Calfin Lafkenche, the lead coordinator of Minga Indigena, said: "Indigenous people who have been historically marginalised have a right to be a part of these talks. The climate negotiations are not considering the need of indigenous peoples. We have come to the British Museum because this is where the spirits of our peoples from our territories are imprisoned. We have been asking for years for these objects to be returned. Climate justice is also racial justice."

He continued: "Climate change is today the most important issue. If COP26 is going to be successful, it has to acknowledge historical, systemic, and institutional ongoing injustice. It has to put climate justice at the heart of its decision making." 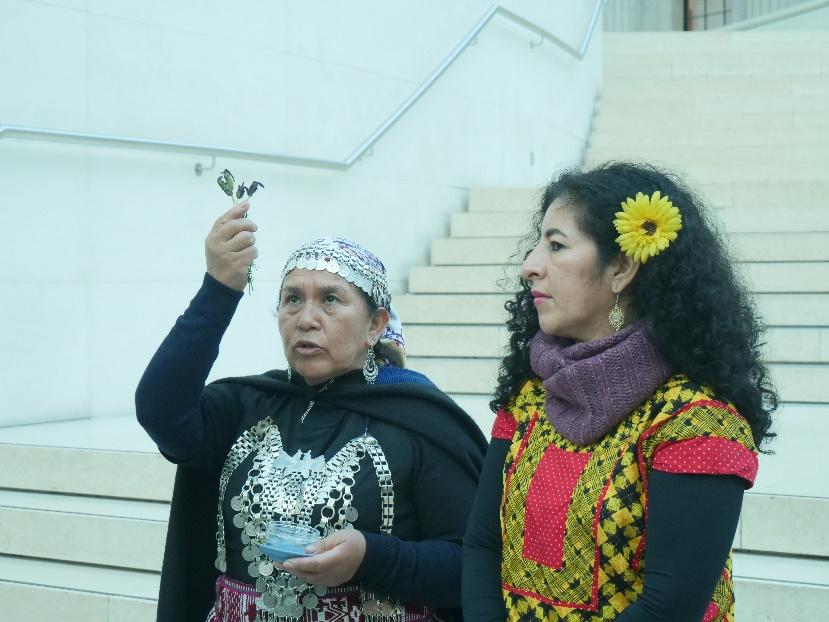 Farhana Yamin, a climate lawyer and a veteran negotiator of the COP process, gave a speech to journalists. She said: "This building represents a vast injustice that has not been acknowledged. We are asking that these injustices are acknowledged. We have an enormous opportunity at COP26 to recognise the harm that has already been done. These conferences need to change. Richer countries have side-lined poorer countries and shut them out of the process. In the final agreement of COP26, all nations must officially acknowledge that the climate crisis is a crisis of justice. It is the product of an unjust system. The people impacted by this injustice did not cause the climate crisis but are now dealing with the consequences. The green transition must not repeat the mistakes of the past."

Nashieeli Valencia, from Zapoteca Mexico, said: "We are to here to speak about peace and to demand justice. It has been our communities, our indigenous peoples, who have had to pay. We are here to demand that the negotiations at the summit never again exclude indigenous peoples."

Justice Reset is a demand for COP to deliver ambitious language on climate justice, just transition and fairness. It requires an official acknowledgement that people impacted by historic and systemic injustice - such as poorer countries, indigenous people, small-scale farmers, children and those with disabilities - are being harmed and must be centred in all decision-making.

The British Museum refuses to reveal how much money it receives from the fossil fuel giant BP, making it a frequent target for climate activists. On the weekend, openDemocracy revealed that BP spent years spying on peaceful climate campaigners, hiring a private intelligence firm set up by a former MI6 agent to spy on activists. BP share this information with public institutions, including the British Museum.

Climate justice activists will gather at COP26 to demand that politicians and negotiators acknowledge the importance of justice and equity in the talks. The COP26 Coalition, a large coalition of activists and groups from across the world, is hosting an alternative summit. They are demanding that richer countries cancel the unjust debt burdens of low-incoming countries and pay reparations for the loss and damage already happening in the Global South. Climate justice activists want no new fossil fuel investments or infrastructure, and a Global Green New Deal.

openDemocracy report into BP ties with the British Museum: www.opendemocracy.net/en/opendemocracyuk/bp-paid-ex-mi6-spy-firm-to-snoop-on-green-campaigners/

Film Premiere: Demain
Chris Bird attends the premiere of the film, Demain, at COP21 and finds an ironic contrast between this beautiful, extremely powerful and empowering film and the glitzy, consumerist way in which it was launched.

Norwegian Wood
A guide to all things firewood. From felling and stacking, to burning and taking care of your woodstove.