How Willows Could be the Future of Tree Health

Research is showing that salicylic acid (from willows) can be used to increase a tree's resistance to a multitude of pests, fungal, bacterial and viral diseases.

"This oak tree and me, we're made of the same stuff." ― Carl Sagan

The increasingly common spread of devastating pandemics is a glaring reminder of the key role of the immune system in disease protection. This extends beyond us to all living things, including the trees in our forests and those used as a food source. The steadily increasing insensitivity of pathogens to synthetic pesticides makes it clear that the days for our current mode of treating infected trees are numbered. Other sanitation strategies that involve felling or burning sick trees have not proven as effective as hoped; the need for alternative control strategies has never been more pressing.

According to Natural Resources Canada, tree diseases in both urban and natural forests are expected to worsen in the coming years due to climate change and the introduction of non-native pathogens. Pests like the 'Emerald Ash Borer', 'Beech Bark' and 'Dutch Elm' diseases have been particularly damaging in Canada. As with the novel coronavirus, infected trees may be asymptomatic, meaning they carry the disease and can spread it, but do not exhibit symptoms. The price tag for dealing with these problems is steep – an estimated $2 billion over a 30-year period for the Emerald Ash Borer alone. For apple growers, a major threat to their crop is apple scab, a result of the Venturia inaequalis fungus. The disease has caused severe economic losses in Canada in years with more moisture.

The disease is equally destructive in the UK, which is why Dr. Glynn Percival, a researcher at the Bartlett Tree Research Laboratory at the University of Reading, has been studying ways to combat it. In his search for an alternative to plant protection products (otherwise known as chemical pesticides), Dr. Percival began studying the effects of mulch sourced from a single species of tree, also known as pure mulch. Early experiments of mulching apple and pear trees with woodchips from hawthorn or cherry showed increased fruit yields of 80% due to the higher sugar content in these trees’ wood. The same mulches also improved transplant survival rates of beech trees from 10 to 70% as well as increased their crown volume growth.

Research on disease suppression with mulch is not a new field, however relatively few studies exist which examine the effects of pure mulches. In fact, some research shows harmful effects from pure acacia, beech, cypress and eucalyptus mulches including inhibiting seed germination. On the other hand, Dr. Jim Downer at the University of California – a pioneer in the field – has found that pure eucalyptus mulch enhances the growth of sycamore. Such varying results highlight the need for more comprehensive research. Building on this previous work, Dr. Percival found application of pure mulch sourced from a number of different trees decreased severity of root rot on horse chestnut caused by pathogens Phytophthora cactorum and P.criticola.

Many people know offhand that willow trees (Salix alba) contain salicylic acid (SA), a compound most commonly associated with the pain-relieving effects of aspirin. Commercially available plant products containing SA have been shown to increase resistance against a number of pathogens including powdery mildew and tobacco mosaic virus. With scientists only beginning to understand how plants are able to synthesize SA in the first place, SA’s role in reducing disease severity is still not clear. According to Dr. Percival, the protein B-Glucanase appears to play a pivotal role. He likens the effects of SA on trees to vaccination in humans. Receiving a dose of SA turns on a tree’s natural defense system, much like a vaccine injection creates antibodies in humans which grant us immunity from disease. What’s even more surprising is that whereas humans require a unique vaccine for each disease, just one dose of SA increases a tree’s resistance to a multitude of pests and fungal, bacterial, and viral diseases. Up to 13 defense mechanisms are activated, causing the tree to thicken its leaves and produce phenolic acids, tannins, defensive enzymes, and antibodies. This is a clear advantage over the application of synthetic chemicals which often require a unique product – bactericide, virucide, etc. – for every problem.

Studies have shown that SA products control disease as effectively as agrochemicals and only require one application for the entire growing season. However, considering the need to spray these products on sometimes very tall trees (a difficult task in urban environments where drift is often an issue), Dr. Percival set out to test whether pure willow mulch could have similar disease-fighting effects. A field lab through Innovative Farmers and delivered by the Soil Association looked at the ability of willow mulch to prevent apple scab. These 10 conventional and organic apple cider growers were interested in exploring alternatives to copper treatment. The main cultivar studied was Crown Gold, which is very susceptible to the fungus. Because different willow species contain varying amounts of SA, this was also measured and is shown in the graph below. 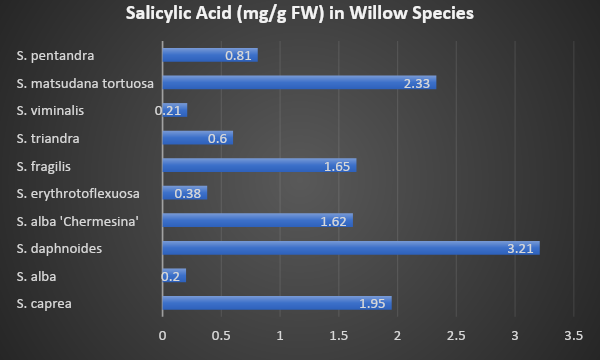 Apple trees were top dressed with 5kg of willow woodchip in early spring. The results reported that summer, although not unequivocally proving the benefits of white willow mulch, are nonetheless promising. Results showed decreased apple scab severity on both leaves and fruit of trees mulched with willow at several sites, although these results were not statistically significant when pooled together. Similarly, fruit sugar content of mulched trees tended to be greater than controls, but again without statistical significance. 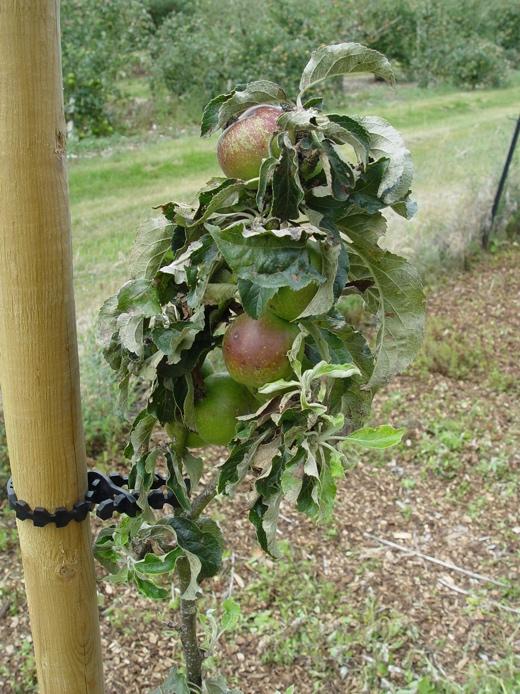 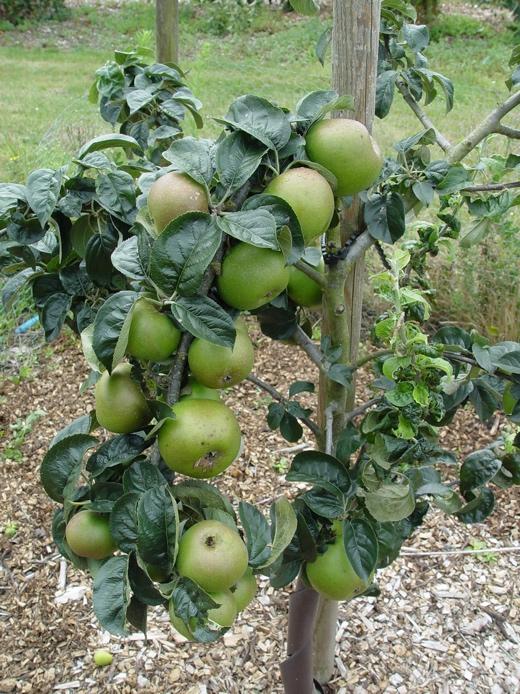 There are several possible reasons for the lesser effect of the willow mulch. Most of the willow species used in the trial were white willows (S.alba, S.alba ‘Chermasina, S.fragalis), which have a lower SA content than other willow species such as violet willow (S. daphnoides) or corkscrew willow (S. matsudana tortuosa). Where the latter variety was used, there were significantly lower levels of scab observed. On top of this, at certain locations the recommended 5kg dose of willow mulch was not applied and especially for large trees, a smaller amount of SA may not have been enough to generate resistance. Finally, researchers later identified that SA is concentrated in the willow’s bark and therefore using woodchip from this part of the tree may prove more effective. As willow bark is a by-product of the basket weaving industry, there is a potential source of this mulch. The next trial plans to examine the addition of biochar to increase the effects of SA, timing of the pure mulch application, and various willow species’ performance in the same location. 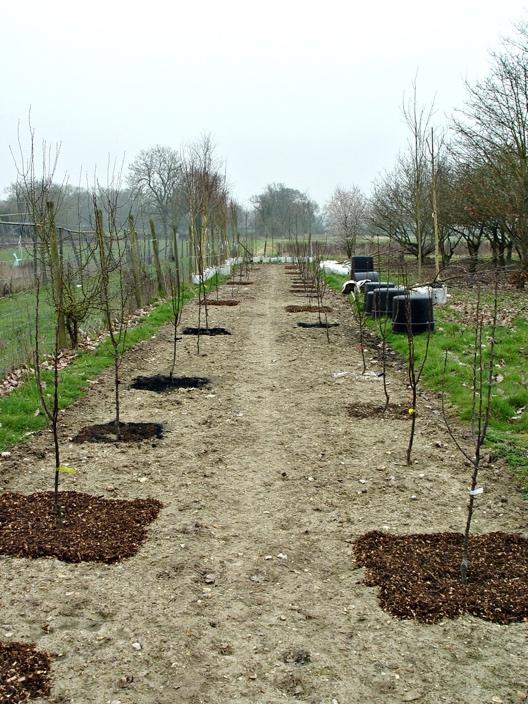 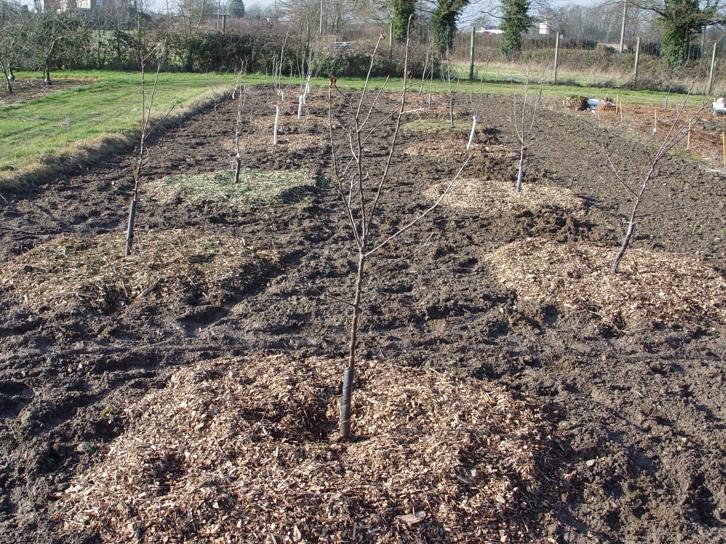 Although finding a suitable quantity of pure willow mulch may not be an easy task for everyone, those who can afford the space could consider growing willows for this purpose. There is a reason willows have been used as biomass for centuries – they are notoriously quick and easy to grow. Even planting them upside down will have them sprouting new roots in no time. This also makes them a good choice for coppicing or pollarding, techniques which involve heavy pruning – either at the base or to the trunk – to stimulate new growth. Note that fresh, not composted, wood chips contain higher amounts of SA as decomposition leaches the chemical from the wood. And if willows are not a viable option, then poplars (Populus alba) also contain salicylic acid, albeit less.

Dr. Percival’s own research is continuing in a similar vein. He is examining the effects of pure mulches within a genus – for example, whether pure crab apple mulch differs from pure McIntosh mulch. He maintains that using pure mulches makes sense from a financial perspective as well. Unlike some disease management strategies, pure mulch requires a relatively small capital investment. Yet another perhaps underrated advantage is the empowerment it can provide to farmers and gardeners who, in a world of desperately marketed products, can take action to boost the immunity of their trees in an independent, safe, and organic way.

Even as the discovery that pure willow mulch helps trees combat disease stirs with hopeful potential, yet another compelling reason to protect our trees emerges. The growing worldwide loss of forests to farmland is being blamed for the spread of diseases such as COVID-19. According to a recent Stanford study, risk of human physical interactions with wild animals and the pathogens they carry are increasing as humans and animals begin competing for the same resources. Once again, we see that the health of our trees is uniquely tied to the health of people. As countless sage individuals have previously declared, we would be wise to protect the trees as we do our own family members.

How to graft a fruit tree

Comfrey: its uses and benefits

The Unexpected Flowering of a New Culture?
Maddy Harland

Living for free: a community thriving by recycling other people's waste
Richard Perkins

The Song of the Earth – A Synthesis of the Scientific & Spiritual Worldviews
A cutting edge new book that blends science with spirit and is written not by theorists but by people who live what they teach and write from all over the world.

The Alternative Kitchen Garden: an A-Z
Graham Burnett finds that Emma Cooper's quirky gardening miscellany is as good studied in the potting shed as it is read in the hammock...

We The Uncivilised
Donnachadh McCarthy reviews a new film that challenges the dominant destructive culture and expresses a yearning for the beauty of simplicity and community.
Advertisement
Advertisement